The Pool of Siloam By Ferrell Jenkins More than 700 years before Christ, the Judean King Hezekiah dug a tunnel to bring the water of the Gihon spring to a new pool which he constructed on the west side of the city of David (2 Kings 20:20; 2 Chron 32:30; Sirach 48:17). This pool would later be known as the pool of Siloam.

One of the great signs of Jesus, recorded in the Gospel of John, is the healing of a man born blind (John 9). Jesus spat on the ground and made clay of the spittle. He then applied the mud to the blind man's eyes and told him, "Go, wash in the pool of Siloam." We understand that mud made from saliva and water from Siloam will not normally cause a blind person to see. This sign demonstrates the power of Jesus over blindness and demonstrates the validity of His claim to be "the Light of the world" (9:5). The blind man's faith to obey Jesus clearly played a role in his healing.

For many years we have been aware of the Pool of Siloam at the southern end of Hezekiah's tunnel. A church dedicated to "Our Savior, the Illuminator" was built here in the fifth century by the Byzantine Empress Eudokia, but was destroyed in A.D. 614 and never rebuilt. Some columns from the building can still be seen. See Hoade, Guide to the Holy Land, and Murphy-O'Connor, The Holy Land, for details.

In early June, 2004, an announcement was made by Ronny Reich and Eli Shukron of the discovery of a pool dating to the Second Temple period (Herod's temple). Continuing excavations have revealed three sets of stairs leading down into the pool. Most of the pool has not yet been uncovered. In November, 2005, I spoke with Professor Reich at the pool and he explained several things about the discovery.

A feature article was published in Biblical Archaeology Review, Sept.-Oct., 2005. Todd Bolen of BiblePlaces.com, who assisted in the excavations at the site, included some comments on his blog at bibleplaces.com/blog/blogger.html. Look under Archives for August, 2005. Many reports that appear in the news media are incomplete and sometimes misleading. 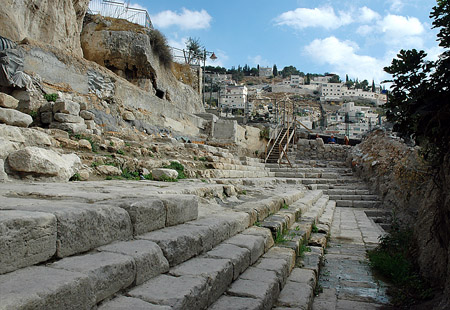 Our photo shows the northern steps and the eastern corner of the pool. You can detect the present road level at the top of the wooden steps. In the distance, across the Kidron Valley, you can see a hill south of the Mount of Olives, sometimes called the Hill of Evil Counsel. Beyond that lies the Judean Wilderness.

Photos © Ferrell Jenkins 2006.
The photos may be used by others in teaching, but may not be used commercially or on web sites without permission.

Bible Study Material on the Internet
at biblicalstudies.info and bibleworld.com