Petra is probably one of the most beautiful, and most unforgettable places one will ever visit. It is located about 50 miles south of the Dead Sea in the territory of ancient Edom. The first visit I made to Petra in 1967 was from Jerusalem (then in Jordan). The distance from Amman or Jerusalem depends on the route you take. The Desert Highway, which connects Amman with Aqaba, is much faster, but the old Kings Highway is much more scenic.

A small Edomite stronghold dating to the Iron Age (7th-6th century B.C.) has been found on top of Umm el-Biyarah which is a high, steep-sided, flat-topped hill in Petra. The Edomites were displaced by the Nabateans and moved into the region of southern Judea. In New Testament times they were know as the Idumeans (Mark 3:8).

The Nabateans have been described as "one of the most gifted and vigorous peoples in the Near East of Jesus' time" (Wright, Biblical Archaeology 229). They exacted high tolls from the caravans which passed their way. The greatest king of the Nabateans was Aretas IV (9 B.C. to A.D. 40). His rule extended as far north as Damascus during the last part of his reign; this was at the time Paul escaped from Damascus (2 Cor. 11:32).

The chief deities of the Nabataeans were the sun god Dushara and the goddess Allat. Dushara was symbolized by a block of stone or a stone obelisk. Several can still be seen in Petra.

The Roman emperor Trajan conquered Petra in A.D. 106 and converted it into the province of Arabia. The Romans continued the rock sculpturing of the Nabataeans but added a theatre, a street with colonnades, etc. Some have speculated, on the basis of Galatians 1:17, that Paul spent time at Petra after his conversion to Christ. 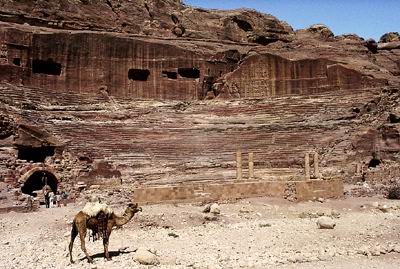 The photo shows the Roman theater at Petra. The theater, cut from the native stone in the second or third century, seated 3,000.

Photos © Ferrell Jenkins 2004.
The photos may be used by others in teaching, but may not be used commercially or on web sites without permission.

Bible Study Material on the Internet
at biblicalstudies.info and bibleworld.com