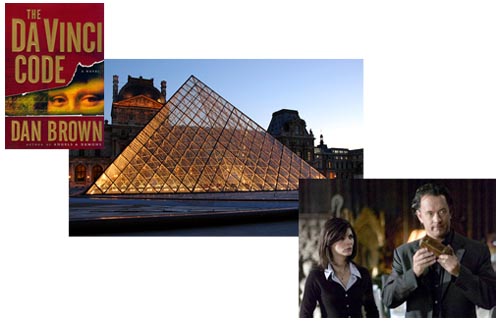 Has any book/movie ever received so much free, mostly complimentary, attention in the media? Even Matt Lauer of the Today Show is visiting the main sites used as setting for the book/movie. This attention is a reflection of the postmodern age in which we live. I think the comment by Dr. Andreas Kostenberger in "The Da Vinci Code: A Myth of Christian Origins" well summarizes the issue.

The Da Vinci Code by Dan Brown is a book about a non-existent code to provide clues to uncover suppressed evidence about a marriage that never took place. But why cover up evidence that does not exist? How does one cover up non-existing evidence? And why cover up evidence about a relationship that never existed in the first place? Such is the logic of The Da Vinci Code, and the above non sequiturs already make clear that the conspiracy theory underlying the book has holes so large to accommodate much more than the proverbial Mack truck. So, why has this novel been so wildly successful when its plot inventions add up to some hefty speeding tickets for its author, as Amy Bernstein aptly noted?

I think the well-known New Testament scholar Tom Wright has put his finger on the pulse of this issue when he writes that the thesis underlying The Da Vinci Code is part of the mainstream liberal American myth of Christian origins that is found at elite educational institutions such as Harvard, moderate Southern Baptist churches, and leading scholarly societies such as the American Academy of Religion and the Society of Biblical Literature alike. According to this myth of Christian origins,

Every Christian needs to be informed about issues affecting the faith, and be prepared to provide a defense to those who raise questions concerning our hope (1 Pet. 3:15). While we rarely agree with everything that is on one of our linked pages, we believe that you will find much helpful material in the pages below. Become informed and be able to talk intelligently with your associates and neighbors when they speak about The Da Vinci Code (book or movie). 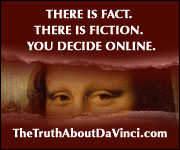 Download the electronic version of Darrell Bock's Breaking the Da Vinci Code book in Libronix format (Logos) for $14.95.
Faith and Thought. Shane Scott has now posted his initial impressions of the movie.

In particular, the resurrection of Jesus was central to early Christianity, though you’d never know that, either, from Dan Brown or from the many other writers who perpetrate the modern myth in its various forms....

In particular, this included from the start a strong political critique. Not the tired old left-wing harangue in Christian dress, of course, but a more subtle, more Jewish, more devastating critique:

Jesus is Lord, therefore Caesar isn’t. That is there in Paul. It is there in Matthew, in John, in Revelation. If the canon was written, or read, to curry political favor, it was dramatically unsuccessful. Those who were thrown to the lions were not reading “Thomas” or Q or the “Gospel of Mary.” They were reading Matthew, Mark, Luke, John, and the rest, and being sustained thereby in a subversive mode of faith and life which, growing out of apocalyptic Judaism, posed a far greater threat to Roman empire and pagan worldviews than Cynic philosophy or Gnostic spirituality ever could.

Why would Caesar worry about people rearranging their private spiritualities? And when Constantine, faced with half his empire turning Christian, decided to go with the tide, what was the church supposed to do? Protest that it would be more authentic to remain a beleaguered and persecuted minority? Let comfortable Western Christians think about what the church had suffered under Diocletian in the years immediately before Constantine — and what the church is suffering in many parts of the world today — and ask themselves who has compromised, and with what.